As a computer nerd, I can spend hours tinkering things or writing stupid stuff on this blog. However, our computers and smartphones screens can be very agressive because of the light they can produce. Today, most of the operating systems integrate a feature to reduce the blue light exposure, accused to have some nocive effects like sleep trouble when you are too much exposed to it. 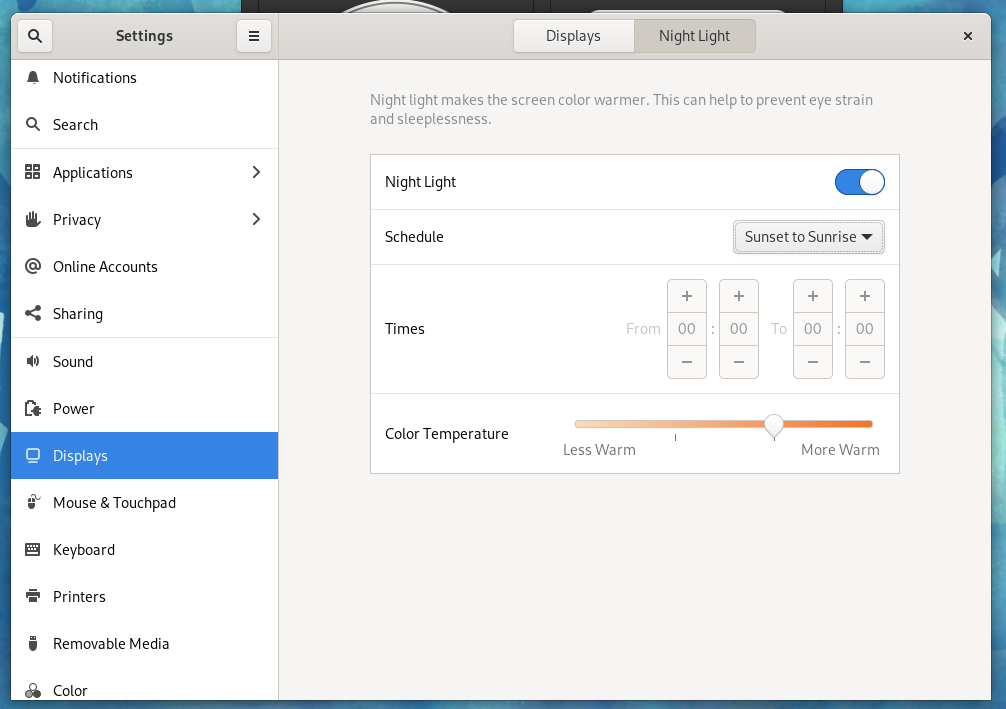 On Linux Distros, not all Desktop Environment propose this feature. GNOME and KDE have a builtin setting but not Cinnamon for example. And I’m a Cinnamon user, so I’ve searched a little and found this project : Redshift.

Redshift is a project started in 2009 by Jon Lund Steffensen, a bioinformatics researcher. When activated, it changes the color output of your display to a warmer red tinted view. A nice feature it possesses is that the color pattern is adapted according to the location and can adapt its effect according to the real night hours and not a specific schedule.

How to install it

Redshift should be available in the major distro repositories. On Fedora, install these two packages :

redshift-gtk is a GUI widget allowing you to interact graphically with the tool. It’s not mandatory as there is also a configuration file for this. Be careful that redshift-gtk can conflict with similar widgets available in Cinnamon’s library, so you may have to uninstall them it you install this tool.

You may encounter an error regarding “GeoClue”. This is the default location provider used by Redshift to know where you are in order to setup the display according to the day/night position. If this package is missing, you can install it :

The location provider can also be modified in the configuration.

When redhift-gtk is started, you’ll see a new icon in your task bar looking like a light bubble 💡. This small tool will permit you to activate or deactivate Redshift and display some informations. You can deactivate the tool for a period of time or until manual reactivation.

Is it changing something ?

Absolutely ! At first, it may looks like a little too warm and attenuated regarding the color pattern of your display, like a photo with a sepia filter. But after a couple of hours you get very quickly used to it.

After using it since a couple of days, I feel my screen light far less agressive and less pressure on my eyes. I can’t tell if there is any real benefits for health after such a short period, I’ll see later for this.

As I’m not using GNOME or KDE I can’t tell if this tool is better than their built-in solution, don’t hesitate to tell me if you have experience with them.