Following my previous article about GitHub Actions, here is a new one that will explain how to locally test your Actions. Unlike the good old Jenkins on which you can copy/paste your pipeline code in a test job and run it (that’s dirty but it works), GitHub Actions requires to always commit and push your changes and wait for the runner to take it. When you’re like me and using a die and retry development process, it’s a waste of time.

To answer this problem, I’ve found and tested act, a community tool that allow to run locally a GitHub Actions workflow. Act is based on Docker API, and require it, and uses Ubuntu images installed as GitHub do it for its own runners (environments variables and filesystem are the same). However, it’s a limited tool as it can’t run a Windows or macOS-based runner and some Actions may not work as the default images does not contains all the tools GitHub Actions offers. However, you can still use alternative runners images.

For this article, I’ve made a quick and dirty test repository that contains an empty Hugo website that will be built and published on GitHub Pages by an Actions workflow.

The workflow is available in the .github/workflows/build_and_publish_site.yml file and is very simple : checkout the repository, use a community Hugo setup action, build the site, and use a community GitHub Page publish Action.

BTW, I’ve was surprised to see there is no official GitHub Actions for a built-in service like Pages…

While testing it, this sample workflow became an ideal example for act usage because I’ve had a failure and tried two options. So let’s test it locally and see if it’s working in my container.

To install act on Linux, I’ve simply downloaded the latest Linux tgz release and unpacked it in my /usr/local/bin folder.

However, as a Fedora user, I don’t have Docker installed but Podman. Act is clear : Podman is not officially supported, but you can still use it thanks to a few tricks. I’ll let you read the debates in the linked issue, that’s not the purpose of this article and I’ll go straight to the point : I’ve made the following alias in my profile.

Reload your environment and go to a repository clone where you have a workflow (in my case, this article example workflow) and try it like this :

You’ll notice a question about the image size. I’ve used the medium one.

You’ll also notice the runner is setup in debug mode by default, very helpful. And after a test run, I see I have the same issue as in the official runner (that’s normal, it’s hugo failing, not a GitHub tool).

I think that’s just because at a time I’ve added the --minify option and now it’s failing because the Hugo installation is not the extended one and the Ananke theme looks like to require it in some cases. Let’s try to modify the workflow locally by adding the extended: true setting the the Hugo setup action.

I think that’s because the workflow is supposed to use the secrets.GITHUB_TOKEN secret value. If your not familiar with GitHub Actions, the GITHUB_TOKEN is a token generated during runtime used for read and write on the repository with the required grants. As act is a local process, no token was generated, so maybe it’s an authentication issue ?

To try answer this issue, you’ll need to use a Personal Access Token from your account and give it to act. You’ll need at least the repo scope (well, I suppose, the GitHub token scopes are sometimes very cryptic, sometimes too large or too small, if you ask me…).

Now, call back the command and add this option :

You’ll be prompted with the expected value. It is possible to give it directly inline like -s GITHUB_TOKEN=mytoken but it’s strongly not recommended as the token may be written in your history. You can also use a file that contain the secrets in the format KEY=VALUE and provide it like this : --secret-file my-secret-file.txt.

However, after adding the token, it looks like the issue is not an authentication problem. But the previous issue is locally fixed, so now we can try in the actual Actions runner and see how is it going.

I’ve committed the fixed workflow and pushed it on GitHub, the workflow is triggered by the Push action on the master branch. And it’s a success ! 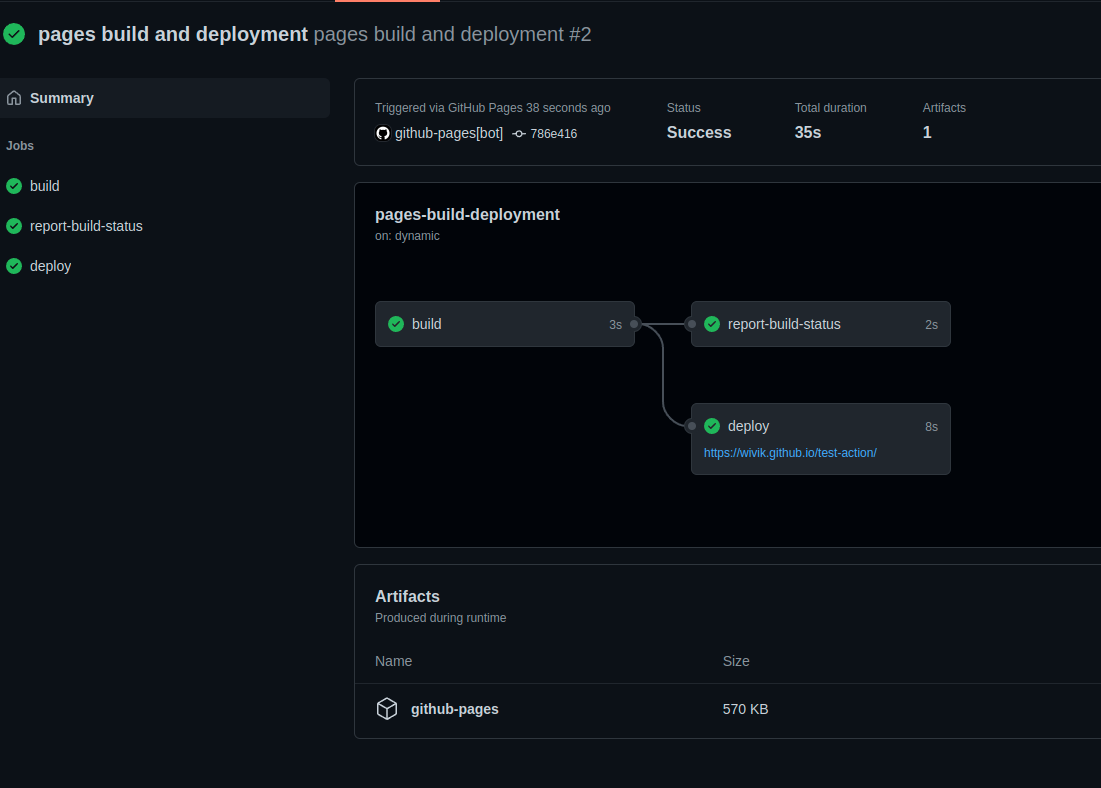 So I think the problem I’ve encountered locally is more a compatibility issue than a workflow design. BTW, about the GITHUB_TOKEN, there was still an error because the Action explains to use the personal_token variable instead of github_token when using one. However, it didn’t work, so it seems to be another issue.

act is a nice tool that permit to test and learn GitHub Actions without throwing hundreds of commits in your history (of course, a squash commits merge strategy fix this problem) and without waiting for the workflow to start. It has its limitations, so in case of doubts, try the live version.