Installing the BL-Touch on a Creality Ender 3-V2

It’s been a year since I’ve bought the Creality Ender 3 v2 3D Printer. Before that, I’ve made my first steps with the Dagoma Disco Ultimate, a French brand. The Disco Ultimate was nice, but it was a old model (despite being a new one for the manufacturer, it was still based on a old frame, the screen was an option I’ve had to buy because it’s very useful, and the build grip wasn’t durable) and I wanted to experiment new features like the heating bed. However, the Disco Ultimate had a builtin feature compared to the Ender 3 v2 : the auto bed leveling.

At first, I’ve wanted to buy the Creality CR-6 SE which possesses this feature and had a good reviews, but it was generally unavailable in my country. So I’ve chosen the Ender 3 v2 as a fallback choice because it had good reviews too and wasn’t expensive. After one year, I’ve missed the auto bed leveling feature and the manual adjustment is terrible. I had the feeling to be obligated to do this every time and it wasn’t fun.

So, I’ve bought the BL-Touch kit and installed it on my Ender 3 v2. And … what an adventure ! But not in the good way. I won’t tell you how to install it, there are many good videos on the Internet (this one was my reference) for this. I’ll provide a feedback about the problems I had and how I ended-up to solve them.

Actually, before installing the BL-Touch I had issues. As recently the printings were more and more capricious (like : “no no no I won’t attach to the bed, no matter what you do, how do you clean it, and how to you set the leveling, the bed will remain lubricated with butter”). Naively, I thought it would be a nice opportunity to upgrade the firmware, maybe there was some fix regarding my problems.

And this is the first problem : where do you get the firmware ? There are 3 “official” sources and without the same things !

The first place I’ve been was the Creality Official store, before I’ve just ordered the BL-Touch and I saw the firmwares were available here : nice ! My motherboard is the 4.2.2 version, so I’ve downloaded the related firmware and installed it in the printer… And that was a mess : the screen was displaying a “450%” speed by default, the Z-Offset was completely lost (like setting it, quitting the screen and suddenly the nozzle was plowing the piece because it lifted down by itself). After a few failed tests that were correctly starting (but still not attaching), the last tentative ended-up by a completely random problem where the nozzle was only moving on the Y-axis and started printing here.

Pissed-off, I gave up and waited to receive the BL-Touch before trying anything else.

The BL-Touch installation is pretty easy. Well, if you don’t mind the very short screws that are misaligned with the frame. Despite being made with a metal frame, the Ender 3 v2 is not well finished when you’re starting to open the hood. Even my Dagoma which was a 3D-printed 3D printer didn’t had these issues.

Anyway, the BL-Touch installed, I’ve downloaded the firmware at the same place I’ve found previously. I’ve made the modifications recommended in the Printer’s profile in Cura (adding G29 after G28 to enable the bed leveling at each print) and start doing the initial setup.

I’m starting the printer, the firmware upgrades itself. Quickly, I’ve noticed the version is closer to the initial one I had… Some features added by the new firmware disappeared. “Whatever” said I to myself. I’m doing the leveling like I’ve seen it in the previously linked video, and then I go to thingiverse to find a test print. The preheating starts, the auto homing starts, and suddenly, nothing happened. The printer stayed as it, heated, the temp was good, and the print wasn’t starting.

The Internet search frenzy is fired up and a “WTF this crap don’t want to work” was already revolving in my head. Some results said there were issues with the firmware, or the G-Code, other said that reducing the temp by 1 degree triggered the print. Curious if it could be an issue with Cura, I’ve tried the official Creality slicer (grrmbll an AppImage, again…). So I’ve ended-up at Creality Cloud where you can download softwares and firmware. Still curious, I’ve checked the firmware and, well well, this one seems far more recent that the one I’ve got on Creality Store (2022 01 13 instead of 2021). So let’s give it a try…

Firmware installed, printer booting up, setting up again the Z-Offset and the bed leveling, firing-up a test print. The nozzle’s moving, yes ! The homing is starting, yes ! And … Nothing else. The BL-Touch didn’t deployed itself, the Z-Axis lift up a little like always, and it didn’t want to lift down. I’ve tried to move it with the screen button to go to zero point : nope.

Remember when I’ve said there are three sources ? Naively (again) I’ve read again the instruction booklet and there was an URL for the firmwares too. And it was only 2021 firmwares on it. I’ve tried this one too, just in case of, without real hope. This is the good part when you’re at the point on which you don’t expect anything anymore, you won’t be disappointed.

Pissed-off again, I gave up and took a walk. As this week end was very festive in my neighborhood and the sun was bright, I’ve brought my camera and took some photos of a nice exposition.

Back to our program

After emptying my head, I’ve started a new Internet search frenzy and ended-up to this tutorial. This one propose to install another firmware made by the community.

At first I wasn’t very enthusiast, but a lot of other articles and forums said it was a very good firmware proposing cool features never made available by Creality. By the way, it was quite unanimous to see that the Creality firmwares are always considered as crappy. That wasn’t comforting me, but it helped me to give a try to the Jyer firmware.

The firmware installed, I’ve said : “wow !”, there is indeed a lot of available features and precise parameters I would never touch as I’m afraid to break something. So I’ve continued to follow the tutorial and at some point it redirected me to a Youtube video of a guy explaining how to level your bed manually with this firmware. Indeed, the Jyer firmware allows to setup a live Z-Offset setting, but not at each corner, only in the middle.

The guy proposed a G-Code for this leveling, but it was hosted on another Thingiverse-like website asking for a registration to download the files … “Fuck you” resonated in my head, I don’t want to register on a website just for downloading a file so I’ll proceed to another way.

To manually adjust the bed, I’ve proceed to setup the Z-Offset in the middle like the firmware propose to do. Then, I’ve homed again and disabled the steppers. I’ve moved the Z-Axis to zero and did the usual paper setting (putting a paper between the bed and the nozzle and adjust to almost pinch it), exactly like I’ve always did with this printer.

Usual advice : don’t forget to adjust your bed leveling while the nozzle and the bed are heated, because you can have differences during the usage if the setting was made while at normal temp. Also, retract the filament to avoid having some residues coming out the nozzle.

The first setup wasn’t so bad.

A hope after so much disappointments

The bed leveled, the Z-Offset prepared, I’ve fired-up again the bed leveling test print and waited to see the result.

Preheating done, the auto homing starts, and yes ! The print is starting ! But there is still a problem, the auto leveling is not triggered before the print.

However, I’ve canceled it at first as the level was still bad. After some adjustments, the new run was starting better. Still some adjustments of the Z-Offset during the execution, and the bed level gears, and tadaaa~ 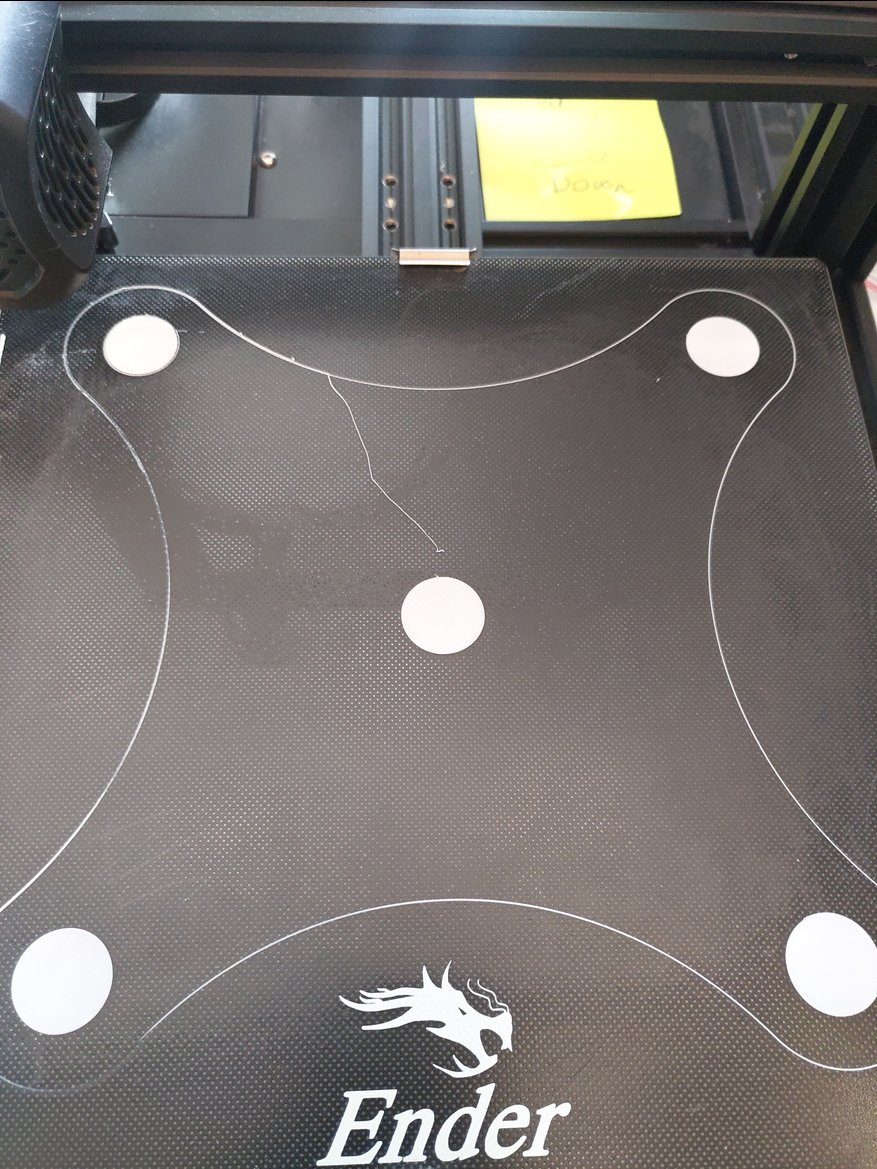 What a relief after all of these problems ! The leveling was still imperfect but it was encouraging.

After that, I’ve addressed the last issue : why the auto leveling didn’t triggered before printing.

Actually, I’ve made an error while modifying the G-Code in the Cura printer profile… I’ve set G28G29 just like the BL-Touch instruction booklet said (I’ve didn’t paid attention to the screenshot which was correct). This last problem fixed, I’m finally back on business.

So, last advice : don’t read the booklet. Go read an expert article or a nice video about how to install it, these guys know their stuff. 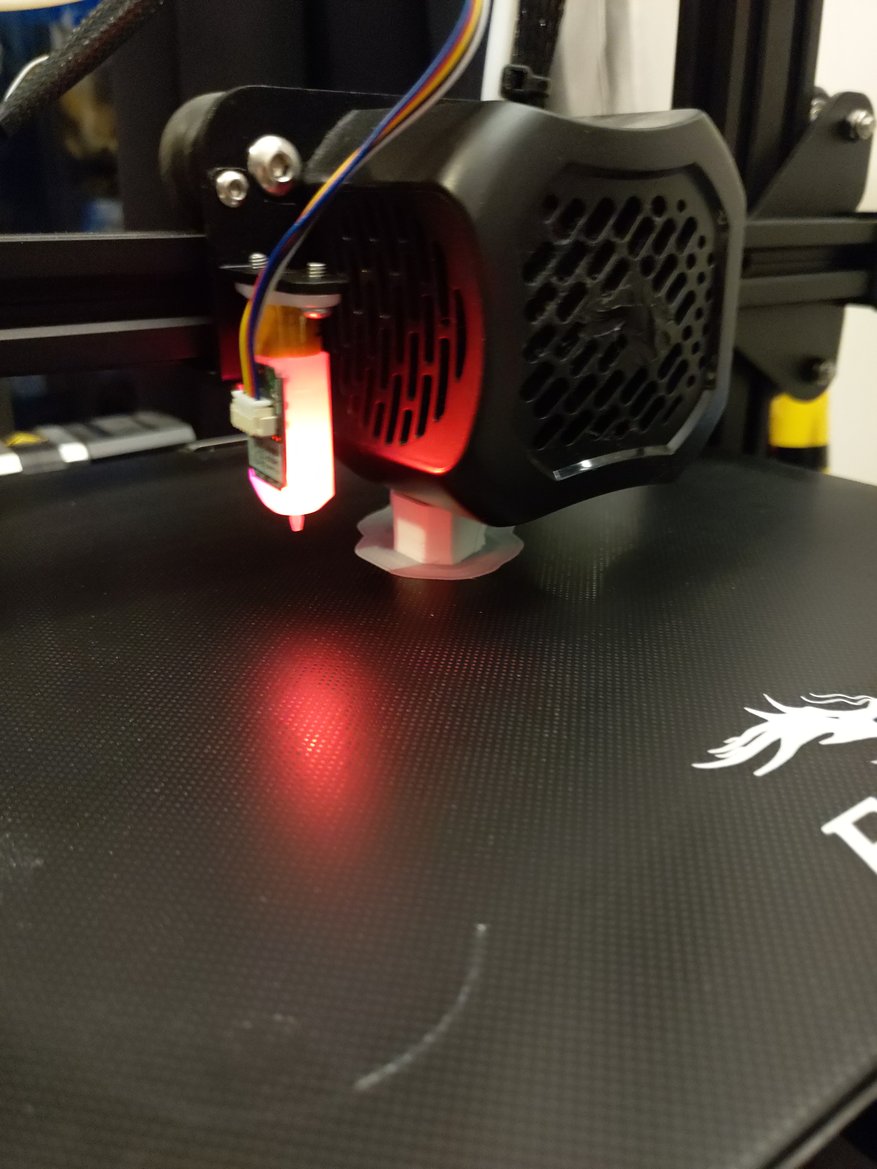 Well, I like 3D Printing and the Ender 3 V2 is a good one. However, it’s sad to see that the official firmwares are so crappy and Creality’s instructions are so incomplete. I’m very happy to have found a solution for this issue and I hope this experience feedback will help someone too.