It’s been everywhere on the news, following the acquisition of Twitter by Elon Musk, a #TwitterMigration movement spread in various Mastodon instances. A lot of new users registered on various instances during the last week (Fosstodon had + 5 000 new users in a week) and Mastodon’s developers told about over 655 thousands active users as a new record.

Some news articles also stated if Mastodon could “replace Twitter” or being “the new Twitter”. But don’t get it wrong, despite similarities, Mastodon and Twitter has fundamental differences that you need to have in mind while using it.

This article won’t be a general Mastodon tutorial usage, there are already a lot of good ones. I’ll just focus on some dedicated topics.

Mastodon is decentralized, or Federated

This is the first thing you must have in mind : Mastodon is not a big consistent service offered worldwide by one unique company. It’s a tool people can install on their own server and use it to join a hive of thousands instances accros the world. This worldwide cluster is called the Fediverse (article in French - I should translate it one day…).

It’s not really easy to know the actual number of instances, because some of them can deliberately choosing to not joining the Federation, and others can be blocked for reasons (see Moderation below). If I request the peers API on Fosstodon, I have 20 440 results at this time. Mastodon.social, the instance hosted by the project itself, can see 27 644 instances. As you can see in the model above, decentralization means that not everyone is interconnected and some servers can create their very own Fediverse.

Unlike Twitter, Mastodon’s instances moderation is local to their own. Each of them established their own set of rules and as a new user and community joiner, you need to follow them. These rules can be various : toot in a specific language, don’t toot about some topics, avoiding tooting illegal content, etc. The rules of the instance are displayed at this address : https://<the-instance-url>/about/more, available on the “About this server” link on each of them (example for mastodon.art).

To appear in the Mastodon’s project directory, the instances must follow a specific rule set called the Convenant. But aside of them, it’s up to each servers to establish their own instance rules. Basically, you need to see a Mastodon instance as a club of people for more or less freedom in their rules.

On Mastodon, you have yourself some nice moderation tool at the user level. Instead of having a unique company thinking about what you should see, or not see, what you should say or not say, the users can themselves moderate which content they don’t want to see at which level.

A user can mute another user, meaning they just won’t be able to see their message but the muted person can still follow them. If a user choose to block another one, the blocked person wont be able to follow the blocker. As the Fediverse is composed of multiple instances, a user can also choose to mute or block a complete instance. The user can also choose to report another one to the instance moderators. This set of actions is also available at instance-level where an administrator can choose to block a list of other instances. This list is also available in the About page. 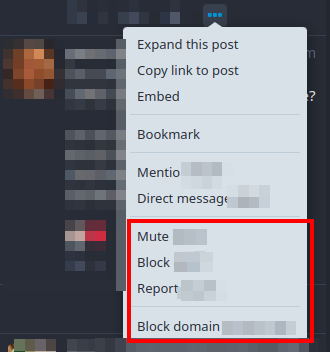 The instance can choose to moderate another instance with the following tools :

Basically : there is no automated moderation on Mastodon. Every moderation action is humanly-curated.

The Local timeline versus the Federated timeline

This is something that may be confusing for people used to Twitter. Because of its federated nature, Mastodon offers three timelines :

Your toots can also have a specific visibility setting. By default, every toot you post will be displayed on the public timeline, even when you mention @someone, it won’t be a direct private message.

You need to use the Visibility setting while writing your toot to define if you want to publish it for everyone, your followers only, or private to someone. 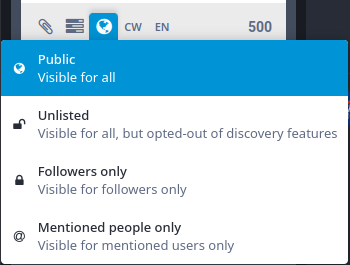 Mastodon is not a prison

Because Mastodon is based on the ActivityPub protocol, a standard one, a Mastodon user can interact with a user on a different platform if these other tools are based on ActivityPub too. Basically, you don’t need to create an account in you want to follow someone of a PixelFed server, or on a PeerTube server, etc. This is not a revolution, that’s how email works since decades !

For example, if I want to follow Framasoft on their PeerTube instance Framatube, I just need to enter its username in Fosstodon and I’ll find it. 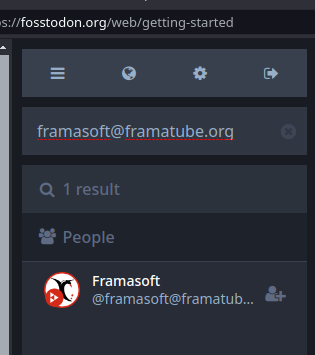 Paste it in your Mastodon instance search field, and you can follow it !

Very nice, isn’t it ? With Mastodon, you have the right to communicate with the external services as long as they are also based on ActivityPub.

Also, if the Mastodon instance on which you have created your account doesn’t satisfy you, don’t worry, you don’t have to delete it and recreate another one.. ActivityPub supports an Account Migration feature and you can do it in Mastodon : Redirecting or Moving your profile.

The only reason why you would need to create a specific account would be because you try to interact with an instance blocked at server-level.

Another cool feature : everything in Mastodon is available as RSS feeds. You want to follow some specific hashtags ? Just add .rss to its URL or use the RSS detection of your browser (maybe an extension could be required) and you will have the feed.

Then, you can subscribe to it in your favorite RSS reader.

Mastodon instances have their own funding model

It may sounds like smashing opened doors with a bazooka, but yes, hosting a Mastodon instance has a cost. If the instance is growing with more and more people and activity, its cost increase.

Also, because of its decentralized nature, the hosting costs are for more fewer that Twitter could have because the amount of people on each of them is fewer. But, it remains a cost and peoples have to pay for it (for example, Fosstodon recently announced the hosting cost increased to 330$/month since the new wave of users). The instance administrators can maintain it but every user can contribute to it with donation. Aside the hosting costs, the moderation of the instances remains an activity made by people on their free time.

It’s not an obligation, but keep in mind when a service is free, that means you’re the product. The company sells advertising spaces to announcers based on your profile. On you ! Basically, they’re selling you. On Mastodon instances, you can contribute to the hosting costs (and I encourage the instances owners to be very transparent on it, because transparency is essential for trust) as you could pay for any service. The difference is : you don’t have a specific price to pay, you do it according to the value you give to the service. So helping them by throwing a piece in the tip jar sometimes could be a fair thanks word.

I hope you have a good idea about what is the Federation and Mastodon thanks to this article. I also hope it will help you to understand some fundamental differences and not see Mastodon as a fallback for Twitter.

Because it’s not a fallback solution : IMHO, it’s a better one.